Master Wallace started training in Taekwon-Do in 1977 in Elgin, Scotland.  He promoted to 8th Degree Master in 2014 in Dublin.

During his own competitive career, he achieved a large number of National and European medals along with a World Championship Gold Medal in 1984 for Power Test.  Following this, he was the UK Assistant Coach for 3 years and the Scottish National Coach for 4 years and in that time, travelled to many European and World Championships.  In recent years he has been the ITF Scotland Pattern Coach and now travels regularly to umpire at World and European Championships. 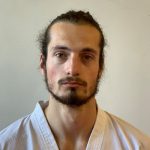