Mr Hong Looi started Taekwon-Do in Malaysia in 1989, then continued his training in New Zealand where he was a member of the New Zealand team in 1999, 2001 and 2003.  He moved to Europe in 2003 and eventually managed to come back home to NZ to win the 2011 Vice World Champion in Wellington, and the 2012 European Champion in Slovenia the following year, defeating the home town favourite and world champion. He also won the 2013, 2015 and 2017 World Champion Team sparring. 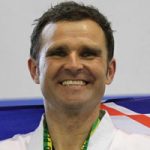